A Few Exceptions Worth Noting 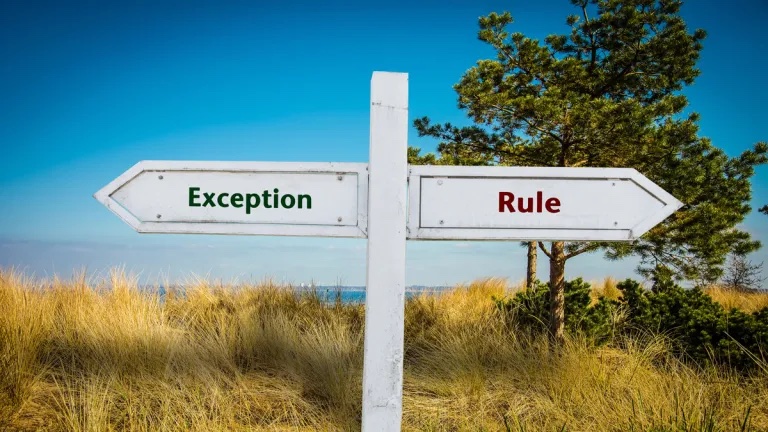 I know a good number of members list “writing” as an interest. I share this piece, originally found here, from The Chicago Manual of Style. It highlights the reality that, in the hands of an expert, rules often yield to exceptions. These are eight of those, at least some of which we’ve all come across.  I found the last one to be fascinating. Enjoy!

Even the most straightforward rule will be subject to an exception sooner or later. That’s why CMOS qualifies so many of its rules with usually or generally. But some exceptions are so common that they deserve to be called rules themselves.

Let’s examine some of the more notable exceptions in terms of the rules they break.

The following seven rules—and most of their exceptions—can be found in CMOS, either explicitly or by example (or sometimes both). To put Chicago’s rules in perspective, some additional exceptions recommended by other guides are also mentioned where relevant, in the explanations following the examples.

1. Do not add an apostrophe to form a plural.

Example: There are two l’s and two a’s in the word llama.

Sometimes an apostrophe clarifies a plural that would otherwise be difficult to read. Though italics alone would almost make the meaning clear—“two ls and two as”—the apostrophes leave no doubt. Some stylebooks extend this exception to include single capital letters, as in letter grades (A’s, B’s, C’s). Others specify them for numbers (1990’s) and for abbreviations in all caps (CD’s).

CMOS currently specifies an exception only for lowercase letters used as such (see CMOS 7.15). Some editors who follow Chicago will also make an exception for capital letters, especially when they would form a word with s (A’s, I’s, U’s). All these exceptions have the same goal: to make the reader’s job easier.

2. The words in a direct quotation should reflect the source exactly.

Exception: The capitalization of the first letter of quoted text can be adjusted to suit the syntax of the surrounding sentence.

Example: Regarding copyright, the US Constitution gives Congress the power “to promote the Progress of Science and useful Arts, by securing for limited Times to Authors and Inventors the exclusive Right to their respective Writings and Discoveries.”

In the Constitution itself (art. 1, sec. 8), that opening “to” begins with a capital T—but only because it’s the first word in a list item (the eighth of eighteen enumerated powers, all of which begin with “To”). Outside the context of the original, the capital T has little significance, so Chicago and most other styles say that it can be adjusted for quotations (see CMOS 13.7, no. 3). (The original capitalization of words like “Progress,” “Science,” and “Arts” is more than circumstantial and is therefore retained.)

Some styles say to bracket any such change (i.e., The Constitution gives Congress the power “[t]o promote . . .”; see CMOS 13.21). Those brackets may help readers find the quoted words in the original more quickly, but any advantage from this intervention (which might be required dozens of times in the typical literary or historical study) is too small to make it a requirement outside of certain legal and textual studies.

3. Do not begin a sentence with a lowercase letter.

Example: iPhones can always be found on eBay, even if you’re looking for a newer model.

Though some styles say to apply an initial cap to words like iPhone at the beginning of a sentence or heading, such words already feature a capital letter; they don’t need any extra help from the Shift key. See CMOS 8.154.

4. Do not begin a sentence with a numeral.

Exception: Terms that include a mix of letters and digits.

Example: 7-Eleven is known to many as the home of the Slurpee.

Numerals at the beginning of a sentence can be hard to read, especially in a work featuring old-style numbers, many of which look like lowercase letters. In the following example, notice how the number 150 is almost hiding at the beginning of the second sentence. The word “Because” stands out as intended.

The capital E in “7-Eleven” makes this less of a problem. (Exceptions like that one aren’t currently included in CMOS, but we will consider adding them in a future edition.) Some style guides allow years as an exception (e.g., 2020 was a long year . . .). That seems reasonable, especially in text that features full-size digits, though putting “The year” in front of a year is an easy workaround (see CMOS 9.5).

5. For spelling, follow Merriam-Webster. If an entry lists two or more spellings, choose the first.

Exception: The Chicago Manual of Style spells copyeditor as one word.

The term was first recorded in the Manual as two words, in the index to the twelfth edition (“Copy editor. SeeManuscript editor”). But for the thirteenth edition it had become one word, and we’ve never looked back. Unlike the verb form copyedit, a first-listed variant in Merriam-Webster, the noun form copyeditor is a “less common” secondary variant. But we like how the one-word noun version is consistent with the verb forms—and with the nouns copyholder, copywriter, and copyreader.

Exception 1: Abbreviations for units of measure are invariable, whether in the metric system or the older imperial system: 8 km, 3 in.

Exception 2: Irregular plurals like pp. (pages, sing. p.) and MSS (manuscripts, sing. MS) and plurals of abbreviations that already end in s (e.g., trans., which can be used for one or more translators).

7. Each new paragraph in a book gets a first-line indent.

Exception: The first paragraph in a chapter or section.

This is more of a convention than a rule (as explained in a recent Q&A). In the first ten editions of CMOS, judging by the prefaces, first paragraphs were indented—as in this excerpt from the 1906 first edition:

Here’s the beginning of the preface in the seventeenth edition (in a screenshot from the PDF file used as the basis of the printed edition). Note how the first paragraph (but not the second) begins flush left:

Most books are designed this way now. It’s a nice distinction, and an example of how the absence of an indent can be as meaningful as an indent. Exceptions should always do this. In the context of rules designed to promote consistency and clarity, any departure should be made with the reader in mind.