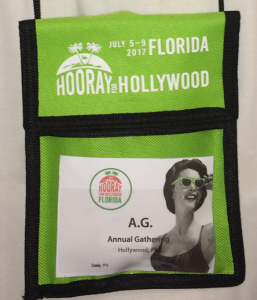 The 2017 Mensa Annual Gathering was my first. And yes, I’m hooked. I only had the schedule ability for one day, and even so, had some life-changing experiences and observations. (Observations — yes, we are Mensa, aren’t we?)

For those that have not been, there are a number of presentation sessions that range from — well, you name it. Over four days, the breadth of what’s presented there is astounding. Some of the biggest challenge is simply deciding between which of the multiple wish-list seminars to see. The ones that were most memorable to me were OLÉ! A Demonstration of Flamenco! and Leading Difficult People: The Role of Emotional Intelligence. And a sweet, little breakout session on Digital Content Creation.

But some of the most stick-to-the-ribs memorable moments were more related to people than presentations. As I drove back home that evening, I contemplated, What were the most memorable parts? Which would I have any interest in returning for? And two came to mind: The very first one happened in the garage on my way to the registration and presentation — meeting Alice and her husband in the elevator: They with name badges, I without. After chatting for a bit, her husband chose to take a subsequent elevator with a friend he had run into; and Alice said, “I’m going to walk with my new friend, Don.” And so we did; and she filled me in a bit on the event, and lay of the land, and on themselves. As a first event, as I drove into the venue, the thought invading my thinking was, will I meet anyone here? Or will I bounce around like a ping-pong ball, interacting with no one? And snap; right out of the car.

The second was the presentation on Leading Difficult People — but it was not primarily the content that was remarkable. It was the interaction. At the beginning of this session the presenter, Jené Kapela asked us to all move up front; and later, all to the right side, as this was going to be interactive. We teamed up with someone we hadn’t known, and began to work through the presentation materials: Who most comes to mind as a difficult person to deal with? And shortly afterward, what were our own core values? — With the presumption that we find most challenging that which is most far from us.

Well after it was over, again on the ride home, I thought about what made that so enjoyable. It was meeting the person I’d teamed with. –Not only to get to know what issues and people were challenging in her own life; but to have the opportunity to share my own as well. Plus the unfolding discoveries of which values we each selected. In both cases, it was the connecting with others.

Thank you, Alice and Usha.

I look forward to the future opportunity to take in a full event. And will absolutely carve out, as priority, the meeting of  the wonderful and unusual people in interaction places. Perhaps the bar, snack bar, coffee shop, or the like. But, without a doubt I’ll seek this out; even if this means missing presentations.

Now, there was one other event of note, but this one deserves a post of its own.